So much of our world has been modified by the human race.  We see man-made objects in some of the remotest parts of the world, clearly encroaching on the natural landscape.  That's a reality that won't go away, so it would seem natural to incorporate those structures and objects into our nature photography when and where it's appropriate.

Step One: What do you want to portray?  This is a hard question, but one that needs answered.  Is the man-made object something that enhances rather than degrades nature?  Does it blend with its surroundings or blatantly stand out?  In the case of these rocks on North Beach in Port Townsend, Washington, the rocks were obviously placed there by people, but it also seemed possible that a natural force assembled these into this cool structure.  Of course that didn't happen, but it's fun to let the mind wander at times like that!

I've been near other structures or objects that were real eye-sores, but don't count those out too quickly.  Sometimes a very strong statement can be made by capturing the contrast between natural beauty and the scars man-made objects have left.  I've often encountered garbage, old tires, bed mattresses and the like while wondering through the woods, and always stop to think if there's an opportunity to showcase that in a positive way.  All too often the answer is no, mainly because it's ugly, revolting, shocking, but also because I'm ashamed at how we treat the Earth. 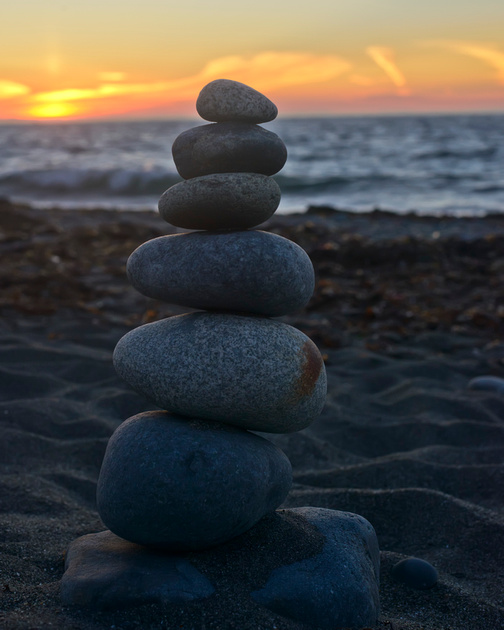 Step Two: How should it be captured?  With many objects, it's easy to see a relationship with nature.  We see examples everywhere...a fence leading to a spectacular patch of trees, or a once-majestic barn that still has fascinating architecture which blends with the overgrown bushes or weeds nearby.  But other objects are more difficult to define.  One way of looking at it would be to pretend the object was purely natural and frame it as such.  I tried to do that in this photo.  The rocks could have easily been a small bush, tree, or drift wood that was waiting for someone to admire it.  But in this case, the formation of the rocks made it easy to follow to the top of the frame and out to the wonderful sunset beyond the horizon.

Step Three: Process and enjoy!  If you've given your composition some thought, you'll probably have a "nature" photo, but with a little man-made influence thrown in for good measure.  After all, everything we know of came from the natural world to begin with, so why not include it in your next shot?

tina(non-registered)
I love this type of photography. I am always drawn to metal and concrete in nature. or weeds growing out of old buildings... I'm glad someone else understands how beautiful these things can be!

here is an example of one of my favorites i took on my iphone recently: