Photography is not all about depicting the world in a perfectly recorded state.  Dreamscapes, motion blur, ICM, blending, double-exposures and Photoshop techniques all help portray our inner visions through technology.   The beauty of these techniques and methods is that they are not science, but rather art, so that unexpected (sometimes better than expected) results occur.

In this case, the sun was setting in Mount Vernon, IA and we were just getting home from having dinner at a local restaurant.  The clouds were lit up and glowing, the light was mesmerizing, and I knew that without a camera, this beauty would be lost forever.  Grabbing my camera and tripod from inside, and knowing that a higher vantage point was needed, I quickly grabbed the extension ladder from the garage and was on the roof in less than 2 minutes.

Since the sun was already below the horizon, I quickly setup the tripod and began to capture the beauty of the scene.  After reviewing some of the shots, it felt that something was missing. 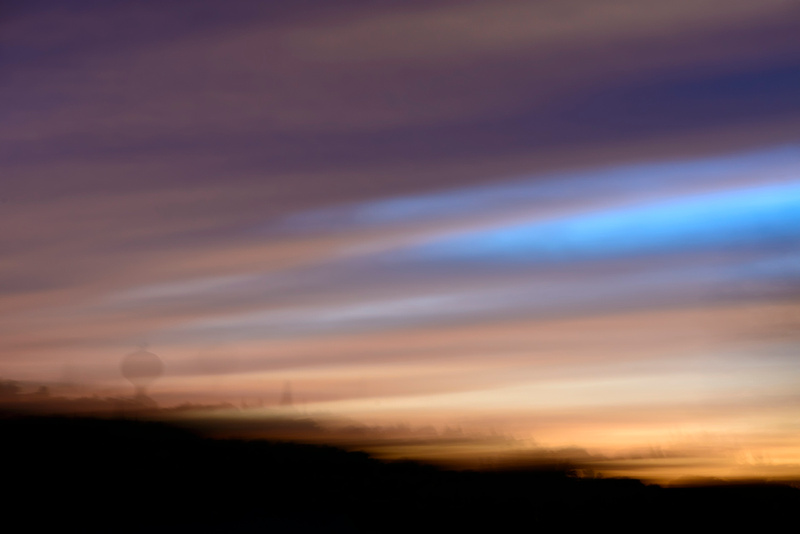 I decided to create something different, and started to experiment with holding the camera by hand to introduce a little movement.  Out of the 3 or 4 photos taken in that mode, this one had the best blend of horizon details, cloud color and that little extra something called "what the heck was that and how did that happen?"

Many of you won't like this photo due to its lack of sharpness or interesting detail.  But to me it's a dream that was created in a split second and carries with it memories and evidence that the world can be real and a dream all at once!

The camera movement created an alternative landscape, or dreamscape, that has elements of reality (the water tower and part of King Chapel on the horizon), but also elements of fantasy and surrealism (the multiple stair-stepped horizon and cloud motion with a foggy feel to it).

The colors were real and very little was done to this photo.  It's basically out of the camera with a little contrast enhancement.  The beauty of this type of photo is that it depicts a combination of real and unreal, and for some of us, that's what we look for in every photo!

I hope you enjoy the wide variety of photography out there and can appreciate all the methods used to bring art and beauty to the world.  Dream on!