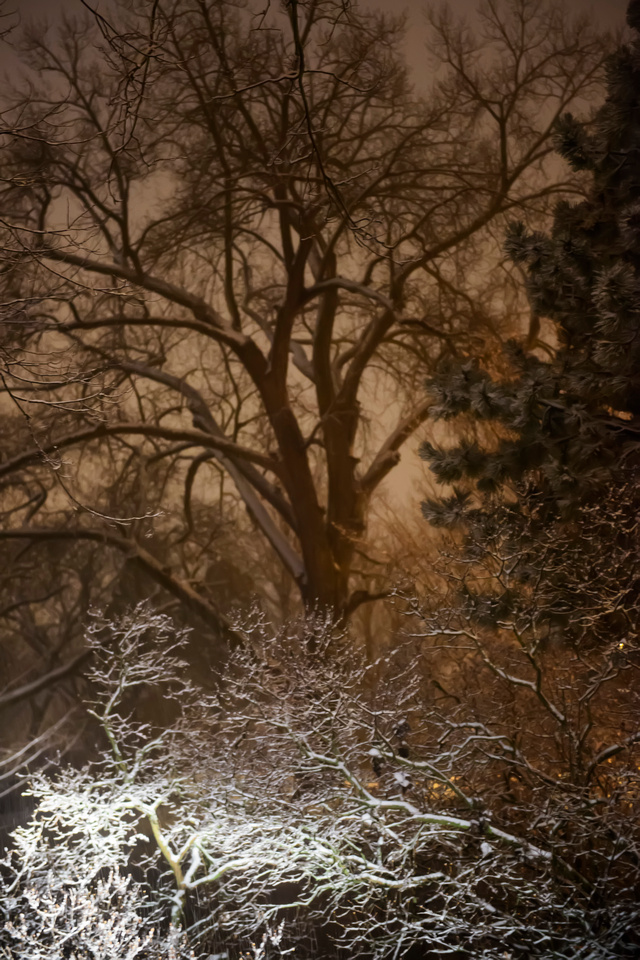 Ominous SnowThe night before a snow storm on the campus of Cornell College in Mount Vernon, IA.

Ideally, natural light transforms your photo from a mundane snapshot into something spectacular.  However, when the light isn't quite right or doesn't exist for the shot you want, adding a little artificial light can make the difference.  In this photo, there was a beautiful white dusting of snow that had accumulated on the bushes and branches that I wanted to capture, but the light didn't highlight the whiteness.   It was dusk and a snow storm was approaching.

I tried using the camera's built-in flash, but it blanketed the entire scene in a white-wash of brightness.  The only other available light source was the headlights of my car, which when pointed in the proper direction, illuminated the bottom portion of the scene, bringing out the purity of white that my eyes had noticed.

As you can imagine, using headlights as a lighting source was a little over-kill, and I had to use a graduated filter in post-processing (Adobe Camera Raw) to tone down the extreme white, but the end result was close to what I had envisioned for this shot.  The foreground gives a nice contrast to the darkness and lets the eye settle on something close and clear.  This was captured on the campus of Cornell College in Mount Vernon, IA.

Other artificial light sources to consider when you're outdoors are flashlights, laser pointers, anything with a headlight (even bikes) and diffused camera flashes (using your hand or other object to deflect the light).  When using that kind of light, you may also have to compensate the exposure to tone down the brightness, or do so in post-processing.  One good way to accomplish that in-camera is to set your camera on center-weighted exposure, making sure the brightest part of the photo is properly exposed.  For me, it's easier to lighten up a dark area than darkening a bright area.  Using artificial light when needed just might give you the creative shot you've been looking for!