The Beauty of Black and White

Many years ago, B&W photos were the norm, and the entire world became very comfortable viewing everything in gray-scale tones. Film in those days gave each photo a special mark of uniqueness since film manufacturing and retail processing had some variability (in most cases that was a good thing!).  Today, color is king, and most photographers use B&W very sparingly in their portfolios (including me!). 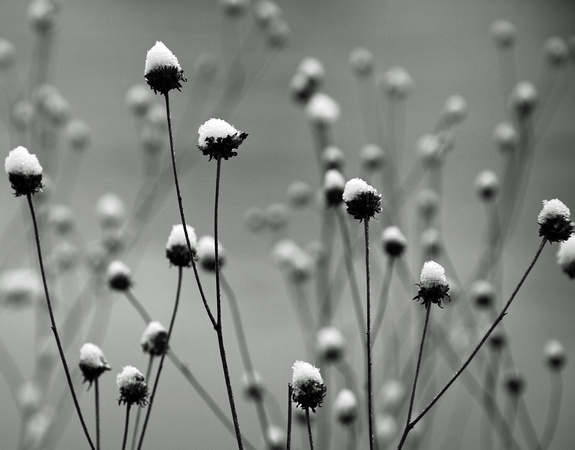 But creating a B&W photo is not as easy as one would think.  In fact, many photos rendered or converted into B&W look absolutely terrible in that format due to the closeness in tones between objects, which cause depth of field loss, or the photo has too many elements blending together, giving it a washed out, confusing look.  But there are photos and subjects that are ideal for B&W.  Those photos tend to have defined shapes, tones or subjects that really stand out or are easy to determine.

This snow thistle photo was created on an overcast, cold, winter day near the Cedar River in Eastern Iowa.  The thistles had little white caps of snow from the previous night's snowfall and there wasn't much color to be found anywhere.  Since there was a wide range of tones between the snow, river and thistles, it seemed a natural fit for B&W.  All I needed to do was increase the contrast a little and crop the photo slightly to get the final result.  In some ways, B&W photography is perfect for contrasting tones, since the eye tends to immediately recognize shapes and outlines regardless of color.

The master of B&W was Ansel Adams.  One of his quotes was "Landscape photography is the supreme test of the photographer - and often the supreme disappointment".  How true!  All it takes is a little less light, standing in the wrong position, using the wrong lens or choosing the wrong shutter speed or aperture for a photo to be dull and uninteresting.  When viewing a scene that could potentially be rendered in B&W, it's equally important to remember that shapes, patterns, and subtle color differences are key elements.  But the results can be spectacular when everything comes together.  Some of the most dramatic photos in my memory from childhood were B&W because of that definition and clarity, as I'm sure many of you can also relate to.

So the next time you compose a scene, think about what it would look like without color - is there enough definition between the subject and background, do you have interesting patterns, shapes or color differences in the scene?  If so, it may be a good candidate for B&W that could really bring out the drama, emotion or personal statement within your photo.